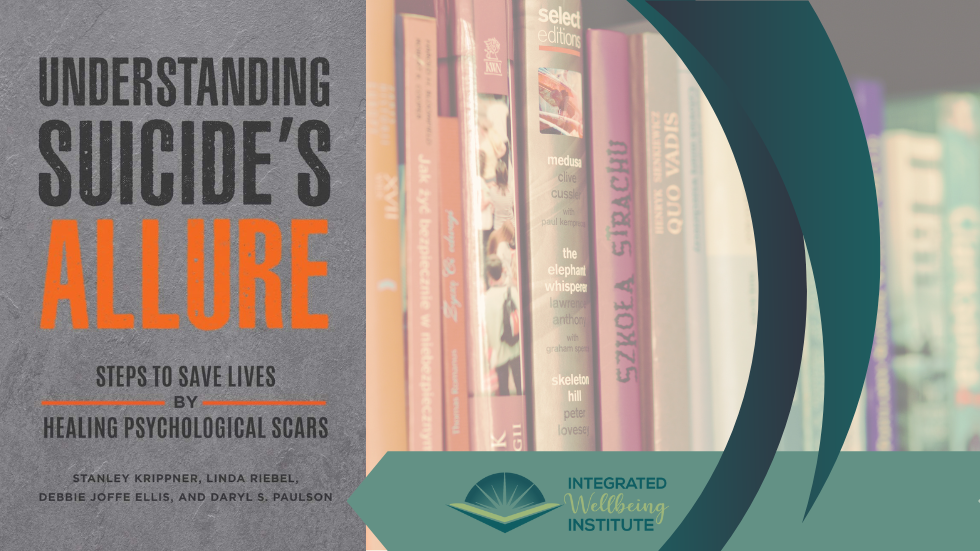 Two books with provocative titles prompted this blog. First, Understanding Suicide’s Allure, by Dr. Krippner*, et al. And One Mind: How Our Individual Mind is a Part of a Greater Consciousness and Why It Matters, by Larry Dossey, MD.

The following is an overview of what I gleaned from reading their material. And as a member of this community, you will appreciate the latest findings on this complex topic.

“Suicide is one of the most shocking events on the canvas of human existence. It often comes as a surprise not just to loved ones, but to healthcare professionals as well.” – Dr. Dossey

Let’s keep this in mind and consider joining me Saturday, October 1, 2022 at the Out of theDarkness Walk: https://supporting.afsp.org/index.cfm?fuseaction=donorDrive.event&eventID=8463

Curiosity is what sparked Dr. Krippner and his three colleagues, Linda Riebel, PhD, Debbie Joffe Ellis, PhD, and Daryl S. Paulson, PhD. to begin their odyssey. They wondered, “Why, after millions of years of evolution and the development of adaptive traits to produce human beings, do some people end their lives prematurely?” Their question resulted in over fifty chapters in their book.

There were another eight findings concluding with:

The authors use the term allure to describe those who find the idea of killing themselves compelling. Allure is tempting, enticing, and even irresistible. For people in unbearable pain, suicide’s allure can be all three.

The term suicide-prone describes people at risk of killing themselves.
Unfortunately, a 2019 study found some alarming statistics. Sixty percent of successful suicides had NOT expressed any suicidal thoughts beforehand.
Even when asked.

In addition to the main foci groups, several others are at risk. These include farmers, teens, children, the lonely elderly, those in chronic pain, minorities, and the sleep-deprived. Each chapter has Takeaway Points, and many have real-life case studies.

Each week, I'll send you a link to my latest blog post, update you on Integrated Wellbeing Institute happenings and more!

The following are among the dozens of specific Takeaway Points that were new to me:

The sections most pertinent for me were about the Highly Sensitive and Teenage Suicides.

Krippner and colleagues shared: About one in five people identified as highly sensitive die by suicide. Highly sensitive people have a few common traits. These consist of heightened reactions of the five senses, acute awareness of even slight interpersonal difficulties, and a tendency to ruminate. Krippner, et al., went on to reveal, “An exhaustive study of the literature failed to support the claim that the suicide rate is usually higher among gifted students because of their alleged emotional sensitivity.”

I also learned a bit of history about the first organized attempt to prevent suicide. It began in 1958 with the founding of the Los Angeles Suicide Prevention Center. Then, in 1966 the National Institute of Mental Health’s Center for the Study of Suicide Prevention opened.

The To the Reader section identified the following Prevention Resources:

The bad news comes from suicidologist and author Kristine Bertini. Her excellent book on the topic is Suicide Prevention. She says, “If someone decides that they are going to die, they will eventually find a way to kill themselves.”

In conclusion, please remember, you are not alone.

*Stanley Krippner, PhD, is a member of the American Association of Suicidology and the International Society for the Study of Trauma and Dissociation. He has coedited or coauthored five books on trauma, including Integrated Care for the Traumatized: a Whole Person Approach. He is a fellow of the Society for the Study of Peace, Conflict and Violence, and the 2002 recipient of the American Psychological Association Award for Distinguished Contributions to the Advancement of International Psychology. Dr Krippner was introduced to me by my dear friend and colleague, Jean Fox in the summer of 2020.

Love all around, above, below, to the left and to the right, before you and behind you,
Georgena

If you’re struggling with the emotional process of grief...

I want to share a free gift with you that can help you recognize the physical, cognitive and emotional reactions you may be experiencing. You’ll also take away prompts to use daily along your journey.

GRAB YOUR GIFT THROUGH GRIEF